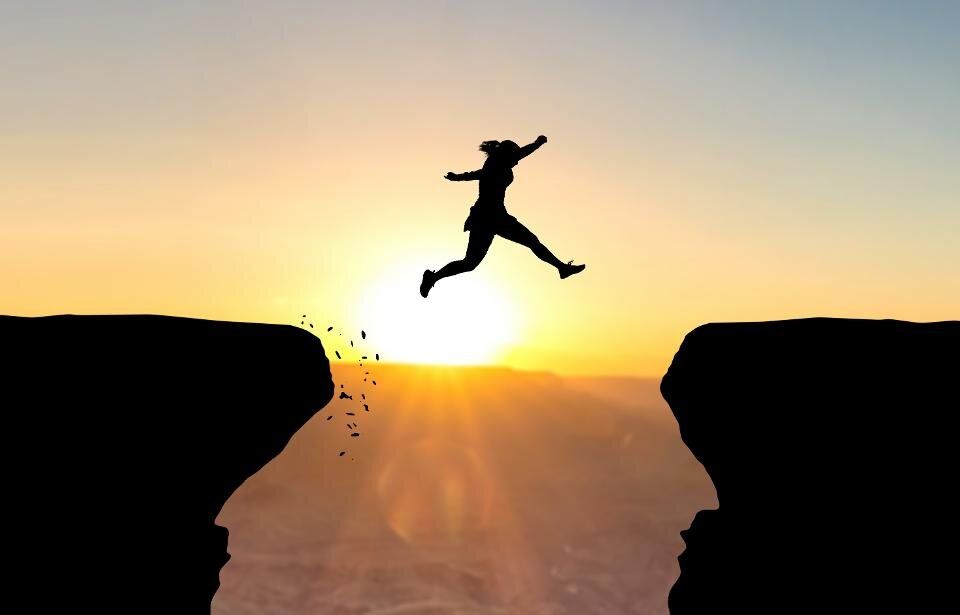 COURAGE IS FEAR HOLDING ON A MINUTE LONGER.

Have you ever noticed what really frightens you? Is there anything that really makes you stop in your tracks. shutting you down mentally? Most people have numerous fears, both identified and unidentified. It’s a miracle that we function at all sometimes.

“What if…” is perhaps the most deadly question a person can ever ask himself. What if I can’t find a publisher for my manuscript? What if I can’t make enough money to keep my new business afloat? What if I apply to that university and get turned down? What if I ask her out on a date and she says “no”?

What we rarely consider when we are contemplating great leaps forward is that surprisingly positive things can happen to us just as easily as surprisingly negative things. If we work hard, make smart decisions, and surround ourselves with good people, good things can happen as frequently as bad things. But for some reason, the human psyche won’t let us believe in ourselves and the positive aspects of life. We believe that others can do great things, but not us.

The “comfort zone” that you have created for yourself can easily become your darkest prison if you allow it to. I agree that it is nice to have a reasonable amount of predictability in one’s life, but to be safe at the expense of being fulfilled is to miss out on life completely. You cannot get from “here” to “there” without venturing beyond your comfort zone.

Another type of fear that plays havoc with our success is the fear of failure. In the game of basketball, shooting free throws is tremendously difficult for some basketball players. In practice, they can shoot free throws all day long, hitting the vast majority of their attempts. But these players—usually the less experienced ones—find it virtually impossible to sink a free throw in a tense situation in a ballgame with limited time on the clock.

Free throws are difficult for a lot of players because, unlike other shots in the game of basketball, free throws are uncontested. The referee hands the ball to the player, and the player has 10 seconds to take his shot. Nobody is guarding him, and nobody is standing between him and the goal. It’s just the player and the ball… and the 20,000 people in the arena and the 2 million people watching on television.

So the player has time to think about the shot he is going to take, and fear sets in like rigor mortis. His muscles tighten, his mouth goes dry, and his knees start to shake because, for the first time in the game, he has the opportunity to think about what he is getting ready to do, and the fear of missing this simple, straightforward shot becomes more than he can bear.

In life, the fear of failure often keeps us from doing great things, because we would rather remain in a place of safety than risk taking a shot and coming up short of our goals. But if we only knew what great people know, we wouldn’t feel this way. Every great person has achieved his goals by falling down a few times along the way. Past failures have made him wiser, not more foolish. Past misses have made him stronger, not weaker.

A third type of fear is the fear of criticism. For most people, the need to be admired is quite strong - stronger than we might think. Also, for most, the need to be accepted is absolutely essential, as essential as the air we breathe. Human beings are gregarious in nature. So even though most of us think of ourselves as “unique” or “different,” the fact is that we are all hesitant to wander too far from the expectations of the flock.

Fear, therefore, sweeps over us whenever we start thinking about doing something that might jeopardize our reputations or threaten our relationships. And this fear is deep-seated, because it starts early in life. As kids, we learn what rejection is like when we experience the pain of being picked last for the softball game or being turned down when we ask someone to accompany us to the eighth-grade dance.

Rejection is painful, and mockery is even more painful. What child hasn’t experienced bullying, and what adolescent hasn’t experienced the trauma of trying to earn his or her way into the “in” crowd? As adults, therefore, we will do almost anything to avoid looking bad in front of people, especially those people whose approval we are seeking. And we will do almost anything to avoid failing in front of our peers and competitors.

But success in life, like success in basketball, is rarely dependent on one shot, one isolated moment in time. Success is the result of a long-term commitment to a goal. At times along the journey, you will make shots worthy of the evening’s highlight reels. But at other times, you will completely “bomb.” In the end, however, it’s not about the player who makes the most spectacular dunk; it’s about the team that has performed best over the course of the game. So ignore the criticism.

A fourth type of fear is that you might get hurt, maybe emotionally, or perhaps financially to name two. The one reality of life that I can assure you of is that life is unpredictable. The weatherman can predict the weather ten years in the future better than you and I can predict the outcome of the choices we make today, because life is filled with too many variables and too many uncontrollable factors to provide us with any guarantees regarding our decisions. And this is why ambitious people must continue shooting at their goals in spite of the fears that haunt them.

With great ambition, there will be pain on the journey toward achievement. So unfortunately, a lot of us abandon our dreams in order to avoid the inevitable hurts that we know we will have to endure in order to do great things. This is one of the reasons that so many people live their lives without ever trying to pursue their goals. They would rather live mediocre lives than get a shot at the doctor’s office.

Bad things might happen; bad things might not happen. We cannot afford to fear things that don’t exist. Just be smart, and count the cost. If the goals that consume you are worth the risks you must take, then take those risks, because nothing is worse than sacrificing your passions for something that might never occur. Besides, even if you do get some bumps and bruises along the way, those bumps and bruises will fade, but the glory of personal achievement will endure for a lifetime.

Surround yourself with people who believe in you and who can help you get where you want to go, people who understand the nature of the game; that it’s not about perfection but about scoring. It’s not about whether you hit the shot the first time or the tenth time; it’s about whether you keep shooting until you score.Draw your encouragement and your support from those who know you best and who believe in you. And do something meaningful with your life so you won’t become a pessimist, judging the performance of others from the safety of the bleachers while you secretly regret never playing the game.The world rewards action, not thought. Even though we admire people who can dream and even though we highly esteem the great thinkers, philosophers, and pundits who put forth noble ideas, the world has always been most impressed by those who can actually move beyond the thinking stage and do something notable with their lives, because people of action are fearless people.

So take your shot. If you don’t hit it, you can always try again. Noble achievements hardly ever happen on the first attempt.