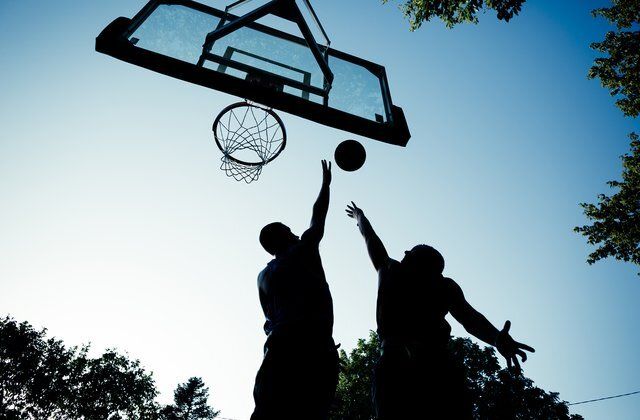 No one plays this game or any game perfectly. It’s the guy who recovers from his mistakes who wins.
—PHIL JACKSON

All my life, I have been struck by the countless similarities between sports and life. Both sports and life require know-how, both demand talent and skill, and both can lead to glorious and fulfilling victories. However, sports and life are marked with obstacles and setbacks too, with mistakes and with crushing defeats. They are each marked with opposition, competition, and failure. And they offer us challenges, as well as opportunities to correct our mistakes and to rise above our failures. In athletic competition, there is always the next game or the next season. In a basketball game, there is always the chance to rebound a missed shot. And in life, we must create the same opportunities to turn failures into successes. We must keep “pounding the boards.”

I believe that Americans are enthralled with sports because sports contain all the core elements of life. Sports involve conflict, they involve hard work, and they involve reward for a job well done. Sports involve the highest standards of self-discipline and personal responsibility. They involve teamwork, talent, skill, and tremendous focus. But perhaps most importantly, sports involve the opportunity to achieve the greatest imaginable goals at the risk of the worst imaginable defeats in full view of other people.

Sports offer players challenges, as well as opportunities. But sports also offer chances for players to correct mistakes and to rise above past failures, because, in sports there is always the next game and the next season, and in sports there will always be an opportunity to rebound a missed shot, to recover a fumble, or to sink a long putt to save par. So these opportunities, along with the ensuing risks, are what make athletic competition so appealing to the masses. Sports are a perfect analogy for life itself.

Have you ever taken a shot at one of your goals only to miss the mark? At one time or another, all of us have fallen short when it comes to the goals we have established for ourselves. But success in the game of life is achieved not in the way we deal with all the triumphs we enjoy along the way; ultimate success is found in the way we deal with the missed shots that can easily destroy us if we don’t learn how to handle them.

I am not exaggerating when I say that I could literally fill the Manhattan telephone directory with the names of people who have achieved great things by overcoming their failures. In fact, most successful people have a track record of failure somewhere in their lives. Henry Ford, H.J. Heinz, and P.T. Barnum all filed for bankruptcy when they were young men. Winston Churchill and Abraham Lincoln suffered numerous political defeats before they were finally elected to office. Thomas Edison was fired twice, and Albert Einstein was expelled from school. And while most successful businesspeople have failed at some point in their careers, most creative geniuses have suffered rejection before they were finally embraced. Just ask Walt Disney or the Beatles.

Greatness, therefore, is not defined by one’s talents as much as one’s tenacity. All of us have talents that provide us with the means for success, but few of us have the ability to bounce back from disappointment and to keep shooting at the goal until we achieve success. It is the ability to rebound your missed shots that will eventually catapult you to greatness, not your ability to score every time you touch the ball.

To my point, a professional basketball team will sign a multi-million-dollar contract to acquire the services of a great rebounder. Rebounders aren’t usually the best ball handlers in the game. In fact, they are so tall and lanky, they typically lack the coordination needed to dribble and pass the ball with confidence. Rebounders aren’t usually the best scorers on the court either. Rarely will you find a “big man” who can shoot a basketball with precision. But rebounders do one thing that is vital to the success of their teams: A rebounders grabs the ball after a missed shot, giving his team a second chance to score.

Just as basketball is not a game of perfection but a game of second chances, life is about second chances too. Victory in life is not reserved for those with perfect shooting records. Rather, victory in life is reserved for those with the ability to rebound from their past mistakes and to try over and over again until they finally achieve success.

What does it take to be a good rebounder? Obviously, for basketball, if you wanted to lead the league in rebounding, you would need certain physical traits. A short player can certainly excel in the game of basketball, but he would never excel “in the paint.” He’s just too short. He doesn’t have the natural qualities that a person needs in order to compete with seven-footers directly beneath the basket. So the first question a person should ask himself before he attempts any lofty goal is whether he has the natural qualities that are necessary for success in that field. Therapists need to have patience, for instance, and morticians need to be able to deal with death.

But the gulf that exists between success and failure is not a gulf that is bridged by natural qualities alone. Most of the people who fail in a pursuit are people who had the natural traits they needed to succeed. But the successful people in any field of endeavor are those who have developed the acquired traits that are necessary to achieve the goals they have established. They have developed the habit of hard work. They have grown in their understanding of their craft. They have learned from their past experiences, especially their failures, and they are applying the wisdom they have gained. They have nurtured relationships that are helpful to the goals they have set for themselves.

Great rebounders are simply tenacious, and the only thing that matters in the face of a temporary setback is regaining control of the ball and taking another shot at the goal, because success is determined by scoring, not by the number of shots it takes to get there. So keep trying, and never give up. Your past has no effect on your future except to serve as a source of wisdom and motivation.